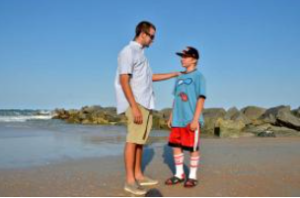 PETER.WILLOTT@STAUGUSTINE.COM Dustan Doucette talks with Austin Wesp, 12, near the Vilano Beach jetty on Wednesday, May 21, 2014. Doucette saved Wesp after a rip tide pulled him far out into the ocean on May 15.

When Amy Wesp finally laid eyes on the humble surfer who pulled her 12-year-old son out of a dangerous rip tide last week, she couldn’t help herself. She just went up to Dustan Doucette and gave him a bear hug.

“I am so glad you got to him,” Wesp told the tall, thin surfer, with tears in her eyes. “God put you in the right place at the right time.”

Doucette demurred and told Wesp that, “Anyone else would have done the same thing.”

Doucette then gave the shy young man whose life he saved nearly a week earlier a firm handshake. Austin Wesp looked up, straight into Doucette’s eyes and said two words, “Thank you.”

And a new friendship was cemented.

The dramatic series of events began unfolding at about 6 p.m. on May 15 near the jetty on Vilano Beach. Austin Wesp and some of his friends decided to go for one last swim in the churning ocean and the young boy was pulled away in a rip tide and flung out past the rocks.

He was clearly in distress and his friends screamed for help. Unfortunately at this point in the day, the lifeguards had gone home.

Doucette, who had previously worked as a lifeguard on St. Augustine Beach, happened to be at Vilano that evening surfing with his friends. He saw the commotion, followed the fingerpointing from the beach and started paddling his surf board to the boy as fast as he possibly could. When he reached Wesp, the boy was in distress.

“He knew enough to tell my boy to cough, cough it up,” Amy Wesp explained.

The young boy did just that and then let out a large amount of salt water right on Doucette’s surf board.

Doucette calmed the boy then paddled him into shore where St. Johns County Sheriff’s Deputy Thomas Coward was wading into the surf.

At that point, Doucette handed the situation off to Coward and sort of disappeared. In the confusion, Amy Wesp was never able to thank the mysterious surfer who she credits with saving her son’s life.

That was until Wednesday night at the exact spot the incident happened.

“I knew he was going to be fine, which is why I didn’t stick around too long,” Doucette told the boy’s mother.

“Born and bred in St. Augustine,” and a graduate of St. Augustine High School, Doucette, it turns out, is EMT-certified and currently studying to be a paramedic. He is hoping to garner employment as a rescue professional in the area.

The surfer said it was pretty much “a fluke” that he was able to jump in and rescue the boy.

“I used to work at the Mojo’s Tacos and some of my friends wanted to go surfing; I’m usually not over here. When I saw what was going on, I just put my head down and paddled.”

Dawn LaMonte, who took the kids to the beach that night so Amy Wesp could attend a wake on the other side of town, was just about as grateful as anyone gathered for the reunion on the picture perfect evening at the beach.

“The kids were all supposed to be walking not swimming,” LaMonte explained. “It all happened so fast. All the kids got scratched up, they were all trying to help as best they could.”

LaMonte drove Austin Wesp to the emergency room that evening. The doctors checked to make sure Austin didn’t have water left in his lungs, his mother explained.

Austin said he received a little ribbing from some of his friends in school about not being a good swimmer, but Doucette told him not to worry about it.

“You can’t fight an undertow like that,” he told the boy.

It was then the pair learned that they both attended Sebastian Middle School and shared the same homeroom teacher.

Doucette’s mother, Holly, stopped by the reunion, recognized Amy Wesp and the world continued to get smaller. It was then that Wesp and LaMonte learned that the surfer hero was the son of a nurse and a firefighter.

As for Austin Wesp, he’s looking forward to summer and ready to go swimming again. In fact, it appeared on Wednesday night, that he had found a new surf coach.