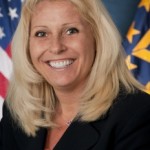 (Reuters) – The top official at a Phoenix veterans hospital was placed on indefinite leave on Thursday amid allegations that delayed care may have led to the deaths of as many as 40 veterans, the head of U.S. veterans affairs said.

Secretary of Veterans Affairs Eric Shinseki said in a statement that director Sharon Helman was put on administrative leave “until further notice” in light of an independent probe into any wrongdoing now being conducted by the agency’s inspector general’s office.