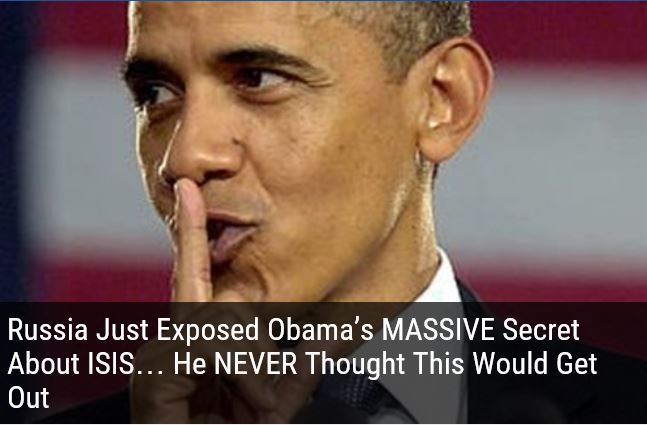 (Top Right News) – Alexei Pushkov, the head of the Russian parliament’s international affairs committee, created a firestorm today when he took to Twitter and said Barack Obama is not bombing ISIS.
“McCain accused us of striking out at US-trained insurgents… However, since they have either run away or joined al-Qaeda, hitting them is a mission impossible,” Pushkov wrote on his Twitter account.

“The US-led coalition spent a whole year pretending they were striking ISIL targets but where are the results of these strikes?” Pushkov asked during and interview with France’s Europe 1 Radio.

Earlier this week the Lebanese Prime Minister Tammam Salam said there “is clearly no seriousness” to the war against ISIS. He added the objective is not eliminating the Islamic State but rather an effort by the West to “force their presence” in the region and worsen the situation there.

“From the very outset, this air campaign has NOT been directed against ISIS,” writes Michel Chossudovsky. “The evidence confirms that the Islamic State is not the target. Quite the opposite.”

“The air raids are intended to destroy the economic infrastructure of Iraq and Syria.”

During the first invasion of Iraq in 1991 the same principle applied.

Souad N. Al-Azzawi of the Brussels Tribunal writes that “the major goals of the bombing was not liberating Kuwait or Iraq, rather, it was the total destruction of the civilian infrastructure.”

The infrustructure breakdown in Libya, coupled with Obama’s allies murdering Gadaffi, led directly to the ISIS takeover of Libya, and subsequent mass migration of 800,000 Muslims into Europe through Libya.
NATO and the US also destroyed Yugoslavia’s civilian infrastructure, targeting schools, hospitals, farms, bridges, roads, railways, water lines, communications facilities, factories, industries and other objects necessary for the basic functioning of a modern day society, according to the Independent Commission of Inquiry Hearing to Investigate U.S./NATO War Crimes Against the People of Yugoslavia.

Bombing the Islamic State runs counter to the agenda revealed in Defense Intelligence Agency documents from 2012.

The documents show the United States and its partners in the Gulf states and Turkey supported the Islamic State and planned to establish a Salafist principality in Syria.
The Pentagon has admitted it “helped build ISIS” and armed the group with weapons transferred from Benghazi, Libya.

In June, Tony Cartalucci, citing the Brookings document, wrote that the goal is “to divide, destroy, then incrementally occupy a sovereign nation thousands of miles from America’s shores.”