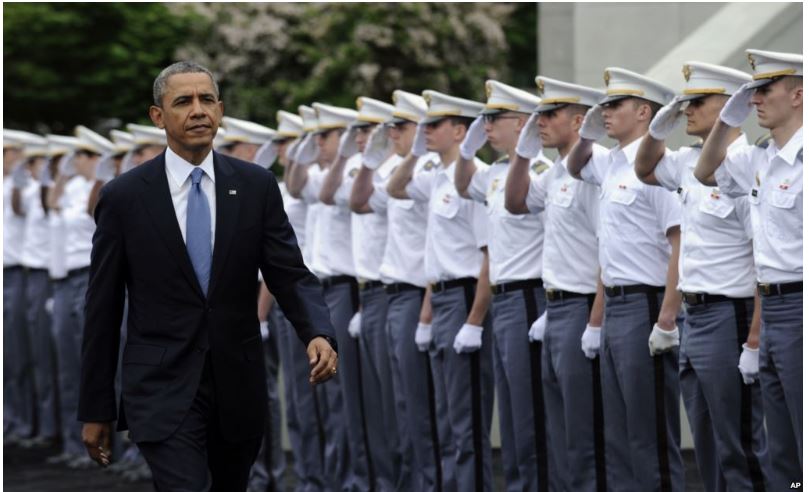 The Military Times recently published a poll that showed only 15 percent of the U.S. military approves of President Obama. Meanwhile his disapproval rating went from 40 percent in 2009, to 55 percent in 2014.

Below is a list of some of the reasons why members of the U.S. military might not be such big fans of the Commander in Chief:

In July of 2014, according to Fox News, “Gen. John Campbell told Congress that 1,100 soldiers, including some currently serving in Afghanistan, would be receiving pink slips due to the sequestration budget cuts to the Defense Department.” What better way to boost morale for our troops serving overseas then for the Obama Administration to fire them while they’re still under the daily threat from terrorists and serving the country.

The Obama Administration sent a clear message to American troops when they decided to send five of the most-high valued Guantanamo Bay detainees back to the Middle East (where sources say they’ll live in 5 star villas). These callous Islamic killers are likely to return to the battlefield where they could pose a threat to U.S. soldiers and Marines.

During the 2013 government shutdown, the Obama Administration went out of its way to deny aging World War II veterans access to the World War II memorial in Washington, D.C. Even though it would have been cheaper to leave the monuments open, emails obtained by National Review Online prove that the Department of the Interior and National Park Service closed the monuments to prove a point.

As Sean often points out, President Obama seems to lack urgency when it comes to just about any crisis going on in the country or worldwide. Thus, it may come as no surprise that when news broke of the horrible conditions, cover-ups and deaths at VA hospitals across America, it took President Obama weeks before he commented on the matter.

5)Using the Marines as Umbrella Holders

Who could forget the press conference in the Rose Garden last May when President Obama called upon two U.S. Marines to hold umbrellas over him and the Turkish Prime Minister because he couldn’t handle a light drizzle of rain? How disrespectful of him to diminish the role of a U.S. Marine to that of umbrella-holder.

6)Ignoring a meeting request from the Fort Hood Terror Victims

In April of 2014, President Obama made his way to Fort Hood, TX for the memorial for the second Fort Hood shooting. Retired Staff Sgt. Alonzo Lunsford, who was shot seven times by Nidal Hasan during the 2009 terror attack, saw Obama’s visit as an opportunity to meet with him along with other survivors to discuss ways they could receive support from the government. Lunsford told Mother Jones, “We wanted to meet with him face-to-face so he could look us in the eyes and see our pain. That’s the only way he’s really going to understand our situation.” Instead of accepting the invite, Obama’s Chief of Staff responded in saying he forwarded their invitation to the Department of Justice.

7)Snubbing the Veterans and not attending the Heroes’ Ball

Every president since it’s creation in 1953 had attended the Salute to Heroes Inaugural Ball—which is part of the inauguration celebrations for the newly elected presidents. In 2009, Obama became the only president to skip out, and sent Joe Biden in his place.

8)Outing SEAL Team SIX and exploiting them for political gain

In May of 2011, just days after the raid on Bin Laden’s compound, Vice President Biden breached national security and bragged publicly that it was SEAL Team Six that carried out the mission. This outing prompted members of the team like Aaron Vaughn to call his parents immediately and tell them, “There’s chatter and all of our lives are in danger…” Since that moment, the SEALs had a target on their backs and subsequently, three months later, a helicopter full of members from SEAL Team Six, including Vaughn was targeted and shot down in a suspicious Taliban attack.

It’s also worth noting that within a week of the Bin Laden raid, President Obama granted unparalleled access to Hollywood director Kathryn Bigelow and screenwriter Mark Boal for the rights to make a movie about the events.

This sent a clear message to our troops that the Obama Administration would rather take credit for the killing of Bin Laden than keep the men who killed him safe from harm’s way. They cared more about having a movie made that makes them look good, than about national security and the devastating consequences their revelation had on our troops.

9)Silence on Marine jailed in Mexico

U.S. Marine Sgt. Andrew Tahmooressi spent over 200 days in a Mexican prison after making a wrong turn in his vehicle and driving across the California-Mexico border with his firearms. Rather than move swiftly to get the PTSD-ridden Marine out of the prison, the Obama Administration was virtually silent on the young man’s plight. According to KT McFarland, “The US Government does do this sort of trading all the time. It’s usually done at lower levels than president to president. But if Obama really wanted to, all he has to do is call president of Mexico to explain how we really want Tahmooresi released and be willing to do a little horse trading for it.”

President Obama showed just how much he respected the troops when–in September–he hopped off his helicopter, Marine One and gave a half-assed salute to the Marines with his coffee cup in hand. Even the Washington Post acknowledged how outrageous this move was, saying, “To do something as belittling and insulting as this “latte salute” is not trivial; it suggests and reinforces something larger at a time when the president is expecting the military to take action, in part to compensate for his past failures.”