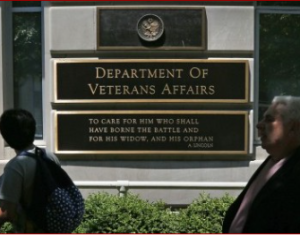 Veterans across the country are outraged and frustrated by the Department of Veterans Affairs’ widespread culture of violating constitutional rights while processing disability claims. Investigative reporting by the Daily Caller has recently brought to light that VA officials are systematically destroying veterans’ disability claims in order portray the backlog in claims as smaller than it is.

Outrageously, the VA officials’ motive for destroying the backlogged claims was to acquire bonuses tied to reducing the claims backlog. Oliver Mitchell, a former VA employee, blew the whistle on the agency’s unconstitutional policy of terminating backlogged disability claims by canceling exams and destroying records. Mitchell, a Marine Corps veteran, could not ethically comply with VA’s orders to sabotage veterans’ claims and stated that after he “refused an order to purge patient documents” he was fired.

There is a widespread culture at VA where officials are rewarded with lavish bonuses for attaining performance goals by any means necessary, including violating veterans’ constitutional rights. Specifically, the Fifth Amendment of the United States Constitution prevents the government (which includes the VA) from depriving a person’s life, liberty, or property without due process of law. Due process of law requires the VA to provide veterans with a fair opportunity to obtain benefits, which include, a timely medical examination and an opportunity to provide evidence in support of their claims. Intentionally destroying vet’s records and canceling required medical exams is a violation of due process of law and veterans may seek legal redress for these deplorable actions.

Unfortunately, many veterans lack the legal knowledge to defend against the VA’s unconstitutional conduct. VA officials count on veterans getting frustrated and walking away from their benefits. VA officials also take advantage of veterans’ “military mindset” of taking orders without question and use it against them to deny their rights with impunity. Needless to say, these government employees are serving themselves — not veterans.

However, violations of constitutional rights by government agents have consequences and veterans need to learn how to fight back. Veterans are entitled to sue VA officials personally for violating their constitutional rights. Vets need to stop taking “no” for an answer and start fighting for their rights and the benefits they deserve. If a veteran is unconstitutionally denied benefits, he or she should immediately call an attorney to take legal recourse. In the civilian world, legal knowledge is the equivalent of M16 rounds. Don’t go into combat unarmed.

Probably the most effective lawsuit a veteran can initiate against VA officials is a Bivens action, from the Supreme Court case Bivens v. Six Unknown Named Agents, 403 U.S. 388 (1971). Bivens actions are designed to compensate victims for unconstitutional conduct. In these actions VA officials may be sued, in their individual capacity and are personally liable for damages — providing a powerful deterrent for unconstitutional conduct. For example, a veteran may use a Bivens action to personally sue VA employees for destroying their records, making arbitrary and capricious determinations, and denying them adequate notice and an opportunity to be heard in a benefit determination. All of these actions constitute a deprivation of a veterans’ Fifth Amendment constitutional rights.

More importantly, Bivens actions, may also allow veterans to personally sue senior VA officials, including Secretary Eric Shinseki, for the VA’s widespread culture of unconstitutional conduct and lack of accountability. On February 11, 2014, Congressman Jeff Miller introduced legislation entitled the VA Management Accountability Act of 2014 to make it easier for Secretary Shinseki to fire VA employees. Yet the problem isn’t an inability to fire poor performers — the problem lies with Shinseki himself.

Shinseki adamantly opposes legislation designed to hold VA officials accountable. In a letter addressed to Congressmen Miller, Shinseki wrote, “I believe VA has sufficient authority to take swift action to hold employees and executives accountable for performance. … VA will continue to ensure accountability and seek continuous improvement as it delivers high quality health care and benefits to our Nation’s Veterans.”

Contrary to what his statement might indicate, Shinseki has failed to discipline a single VA employee for intentionally destroying veterans’ records and unconstitutionally denying their claims. In fact Shinseki refuses to cooperate with Congress’ investigations of mismanagement at VA, requiring Congress to subpoena him and create a Congressional website entitled “Trials in Transparency”!

Make no mistake, VA officials do not have veterans’ interests in mind, and they will unconstitutionally deny a veteran’s benefits until that veteran gives up or dies, and then bury their “mistakes.” Under Shinseki’s deplorable leadership, VA officials will continue to serve themselves before vets, all to get a bonus. Veterans fought for the Constitution, and it’s time they start using it by commencing legal action against unscrupulous VA officials.