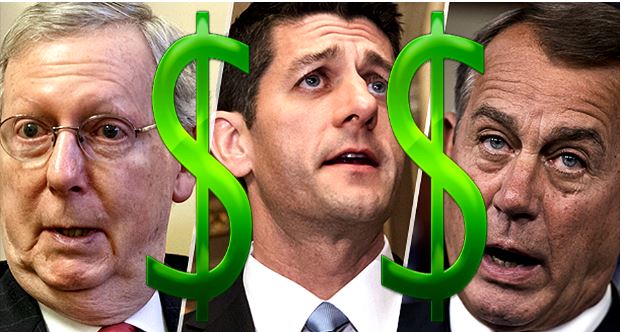 The politicians like to keep the money trail brushed as clean of their footprints as possible, to make it less blatantly obvious that they are exchanging votes for “campaign” cash. Money talks in DC. In our current government it is the only language other than Orwellian double speak which is understood.

John Boehner, Paul Ryan, Mike McCarthy and other House members did quite well for themselves financially in the pursuit of their corporate masters’ dreams of overthrowing the United States government.

Anyone who wonders how millionaires or billionaires are made on a Congressional salary can get some good insight from this information, published by Maplight.org.

In the instance of H.R. 1314, the legislative vehicle for moving Obamatrade, from the period of October 1st of 2012 to September 30th of 2014, the amount of “potentially” influential financial contributions heaped upon the largely unscrupulous members of Congress in both chambers was nothing short of obscene.

Contributions from pro-Obamatrade lobbyist alone were enough to make very wealthy people of those who are supposed to represent the citizens, and the period of time immediately preceding the vote, that between October 1st of last year and June of 2015 is still unknown. Certainly the pot was “sweetened” considerably more as the deadline drew nearer.

Contributions to House members from forces favorable to Obamatrade outnumbered those from those opposed by a factor of 8.6 times, $197,869,145 to $23,065,231. The differences were even more stark in the Senate, with a total of $285,225,162 in financial incentives being meted out from supporting groups and only $27,569,149 from the opposition, over ten times as much. There were 32 House members with over a million dollars in contributions and many who were just below that threshold. In the Senate, only five Senators were below the one million dollar mark, and two of those, Senator Jeff Sessions (R-AL) and Mike Lee (R-UT) voted no, and against betrayal of their country.

The formula in the House seems fairly simple, at least as far as rewarding those in leadership positions. Speaker John Boehner (R-OH) got a cool $5 million and change, Mike McCarthy (R-CA) half that at $2.4 million, and Steve Scalise (R-LA) half again at $1.2 million. For Paul Ryan, the price of American sovereignty was $2.2 million.

Rep Bob Goodlatte (R-VA) was a member of the million dollar club at $1,053,646. Jeb Hensarling (R-TX) collected $1.4 million, Cathy McMorris Rogers received (R-WA) $900,732 and Mike Pompeo (R-KS) $949,708. Pete Sessions, House Rules Committee chairman, was compensated to the tune of $1,057,079, with his fellow Texan, Lamar Smith picking up $608K. Marsha Blackburn (R-TN), who fought against illegal immigration, we thought, during the amnesty battle, received $700,687 and voted for uncontrolled immigration and the usurpation of domestic American rule.

Financial gain doesn’t appear to be the only reason behind surprising anti-American votes in favor of the three secret bills, a dictatorship and foreign control of our nation. Disappointing betrayals by supposed champion of conservatism, Steve King (R-IA), who received only $382K, Jason Chaffetz (R-UT) $358K, and Trey Gowdy at $305K still don’t make sense.

In the Senate the picture is even uglier, and much more blatant. Mitch McConnell (R-KY) “acquired” $9.2 million, John Cornyn (R-TX) $5.3 million and Orrin Hatch $4.2, the third member of the Senate trio of traitors forcing this upon us.

Marco Rubio pocketed $3.9 million for voting to tie us to a bill he never read, with his fellow presidential candidate Lindsey Graham “earning” $3.4 million. Candidate Rand Paul (R-KY) voted against the package both times it came up in the Senate. Ted Cruz (R-TX) first voted in favor of it but was eventually forced to recognize the will of the people in the interest of the survival of his campaign and cast a meaningless vote once the debate and outcome was determined.

It is clear that money talks, and the people can take a hike. Once the numbers come in for the current year, it will be interesting to note just how much influence was purchased in the last days and weeks leading up to this betrayal. While nobody in the Senate is stupid enough to admit that their vote was purchased or influenced by being handed the equivalent of a mansion or a lifetime of earnings for most Americans, neither are we stupid enough to believe that a pattern of corruption doesn’t exist.