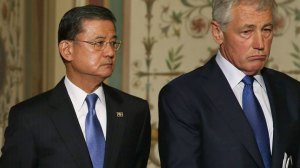 Defense Secretary Chuck Hagel (R) and VA Secretary Eric Shinseki (L), stand next to one another at a news conference on Capitol Hill May 22, 2013 in Washington DC.

Thu May 8, 2014 2:22PM
Secretary of Veterans Affairs, Eric Shinseki, says he does not plan to resign despite calls for him to quit over a string of scandals.
“What I want veterans to know … this is a good, quality healthcare system, not perfect, and when we stumble across our imperfections we’re going to do something about it, we get to the bottom of it, and to the best of our abilities assure it never happens again,” Shinseki said Wednesday in an interview on NBC News.
Shinseki’s comments were a response to senators and veteran groups calling for his resignation after claims were made that as many as 40 veterans have died on the healthcare system’s waiting list, Reuters reported.
Shenseki said that he is “angry” over the claims and requested a full investigation.
He also said that he serves “at the pleasure of the president.”
Some Republican lawmakers, including Kansas Senator Jerry Moran who sits on the Veterans Affairs Committee, have called for Shinseki’s resignation.
Moran said on Tuesday the Veterans Affairs Department needed a “true transformation … from top to bottom.”
Sen. John Cornyn (R), also said Tuesday that, “The president needs to find a new leader to lead this organization out of the wilderness, and back to providing the service our veterans deserve.”
Veterans Affairs is the biggest US healthcare system, with 1,700 hospitals, clinics and other facilities. It has nearly 9 million people enrolled.
The American Legion, the biggest US veterans group, and Concerned Veterans for America, have called for Shinseki’s resignation over the scandals.
The White House, however, has defended Shinseki’s conduct saying the president remains “confident in Secretary Shinseki’s ability to lead the department.”
AN/HRJ